From Space Hippie Space Wiki
Jump to navigationJump to search 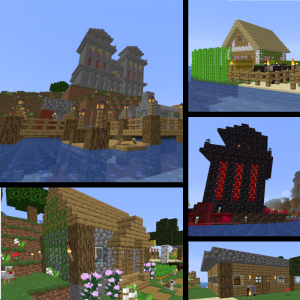 A collage of buildings on the Space Hippie Minecraft server, as of 30 August 2020.

Space Hippie runs a vanilla Minecraft survival server! The server is whitelisted, so only members can access it. To access it, simply add spacehippie.ca:25565 to your Minecraft server list.

Also, as of 18 November 2020, the Minecraft server is now automatically backed up to an external disk each day at 03:00 local time.

When Minecraft 1.16 was released on 23 June 2020, the nether was reset so that we could have the new biomes.

On 18 November 2020, a script was written to automatically back the map up to an external drive each night.

On 27 December 2020, the Minecraft server and map were migrated from Space Hippie (Server) to the current server, Beeblebrox, along with all other services and sites that were running on Space Hippie at the time. As of 16 October 2020, Beeblebrox is still Space Hippie's primary server.

On 21 February 2021, the server was switched from the official Mojang server software to Spigot, to allow plugins and improve performance.

Server hardware is a problem - there's lots of lag and the server tends to crash. Someday soon I'll upgrade!